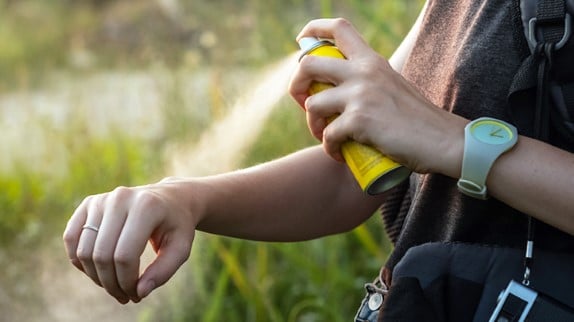 How to Safely Protect Yourself From Mosquito Bites During Pregnancy

If you're pregnant and wondering how you can protect yourself and your baby from mosquito bites, the answer is simple: insect repellent. Not only is it safe to use certain kinds of bug sprays according to the instructions on the product label, it’s also a smart way to guard against Zika and other mosquito-borne illnesses. Here's what you need to know about protecting yourself from mosquito bites and, in turn, Zika.

What attracts mosquitoes to pregnant women?

If mosquitoes seem to love snacking on you more than ever now that you're pregnant, it's not just your imagination: Pregnant women attract more mosquitoes as non-pregnant women do. Experts think it could be because the pesky bugs are fond of carbon dioxide and pregnant women tend to take more frequent breaths, exhaling 21 percent more air — thereby releasing extra amounts of the gas, as well as moisture, that the pests are so drawn to.

Another reason mosquitoes make a beeline for expectant mothers? They're heat-seeking, and pregnant moms generally have higher body temperatures than other women do, what with all that baby-making going on.

Zika and other mosquito-borne diseases

Fortunately, most of the time, all this added attention from mosquitoes is merely an itchy nuisance. But when mosquito-borne illnesses are involved, bites can spread disease that might be dangerous to you and your baby.

In some countries, mosquitoes can carry diseases including the chikungunya, dengue and Zika viruses. To date, the chikungunya and dengue viruses have been found in countries across Africa, Asia, Europe and the Indian and Pacific Oceans. And there have been outbreaks of the Zika virus across the world, including South America, Central America, Mexico, Puerto Rico, parts of the Caribbean, Africa and the United States (specifically in parts of Florida and Texas, although in 2019 no cases of local transmission have been reported inside the U.S., says the CDC). Find out what areas are currently experiencing Zika outbreaks at the Centers for Disease Control and Prevention's site on areas with risk of Zika.

Media Mentions from What to Expect

Your go-to resource for preconception, pregnancy and parenting advice.

What to Expect is the world’s best-known, most trusted pregnancy and parenting brand, helping every parent know what to expect, every step of the way. Building on the bestselling What to Expect book series by Heidi Murkoff, What to Expect Digital reaches over 15 million parents and parents-to-be each month with its popular website and top-rated apps for Android, iOS, and Amazon Echo.