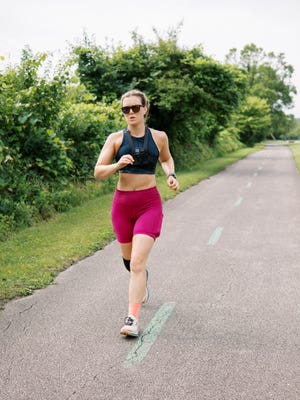 She said that her final ultra was the "icing on the cake" of her 11-day adventure because she reached her initial fundraising goal of $34,100 the night before.

"It definitely feels surreal because, usually, whenever you attempt something like this — a goal — it's alive in your head, for a long time before it becomes alive in the flesh," she said. "So, it is almost like a 'Pinch me, is this real?' moment, and you're so focused on this one step ahead."

As of Wednesday,  Spotz has surpassed that goal by $4,571, totaling $38,671. The donations, collected in partnership with service-learning organization H2O for Life, will fund 11 clean water projects in Ugandan communities building rain-catching tanks and restoring defunct wells.

Although she's back to work in Maine as a Lt. Junior Grade Coast Guardsman (and awaiting review from Guinness World Records), she said she and her crew found time to celebrate their successes and unwind from the journey when she finished at Edgewater Park in Cleveland.

"It was really nice just having people I love, friends, family, new friends, there at the finish to celebrate with, and then of course it was definitely really refreshing to hop in Lake Erie after that," she said.