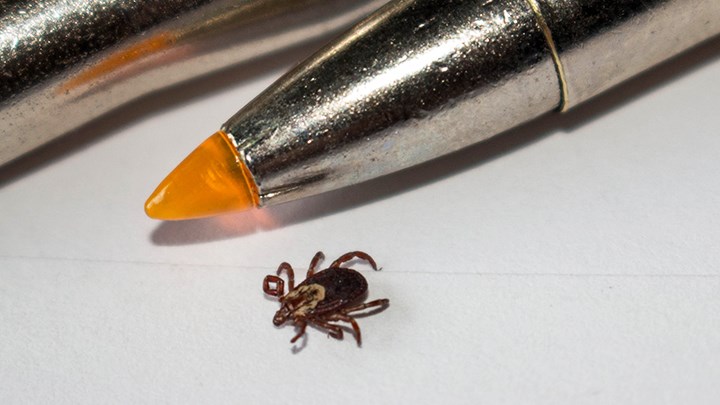 What Hunters Need to Know About Ticks and Tick-Borne Diseases

I sat on watch for  in my favorite patch of hardwoods, enjoying the sun on the yellow hickory leaves, and watching and listening for any sound of the whitetail buck I had patterned in this patch of woods. Hearing the faint crunch of leaves, my hopes rose, in spite of the itch on the side of my neck. Focused, I quickly determined the crunch was nothing more than a hungry gray squirrel in search of sustenance, but the itch on my neck soon had my undivided attention; it was one of five deer ticks crawling on my chest, neck and head.

The deer tick or black-legged tics—Ixodes scapularis—is the scourge of my world. The tiny demon has wreaked havoc with my health, as well as that of my family, friends, dogs and more. Let’s get this out of the way first: I am not a medical doctor, nor did I stay at a Holiday Inn Express in the recent past. I am, however, an avid outdoorsman who enjoys hunting big and small game in my native state of New York as well as around the globe; in addition, I am, professionally, a licensed Land Surveyor who works outside twelve months of the year. I have probably been bitten or stung by most of what New York has to offer, with the exception of the poisonous snakes. That said, I’ll take whatever mixture of mosquitoes, deer flies and black flies you choose over the damnable deer tick.

I started my apprenticeship working for my father in 1983, at 11 years old, and clearly remember that the only ticks we ever came across were the brown dog ticks, which would fall off the hunting dogs, swollen with blood. Simply put, ticks were not an issue, and Lyme, Conn., was just a town in my neighboring state. Though the disease was named and its symptoms were identified in the late 1970s, it would take another decade for the little arachnids to become a problem for surveyors, sportsmen and hikers in the Hudson Valley of New York. Once they reared their ugly heads, life changed forever.