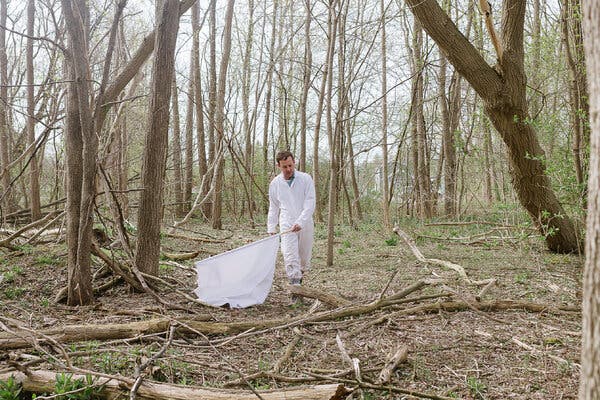 Tick Hunting: The Prey Are Tiny, and the Bait Is Human

Climate change and other factors have brought several new species of ticks, and frightening new diseases, to New York in recent years.

FAYETTEVILLE, N.Y. — Before he goes out to hunt, Brian Leydet pulls on his hiking boots and his all-white jumpsuit, fetches a homemade flannel flag out of his car and then, most importantly, duct-tapes his socks to his pant legs.

Then he heads into the undergrowth, dragging his flag around like a morose matador.

He has no lure, but needs none: Mr. Leydet’s quarry is quick to attach to the white flannel, using its tiny hooks on their legs to grab hold as it seeks its own prey — a warm-blooded host on which to feed.

“I am literally the bait,” he said.

He found a female black-legged tick almost immediately. Mr. Leydet allowed it to crawl across his hand, with a sense of appreciation for his prey.

“They are the neatest little creatures,” Mr. Leydet, an assistant professor of epidemiology and disease ecology at the SUNY College of Environmental Science and Forestry in Syracuse, N.Y., said. “I could do this all day.”

Mr. Leydet is a tick hunter, and his targets are the creepy, eight-legged arachnids that have fast become one of summer’s biggest bummers. Aided by climate change and other environmental factors, ticks have in recent years steadily expanded their turf in New York and nationally, including in the Northeast, which has long been a hot zone.