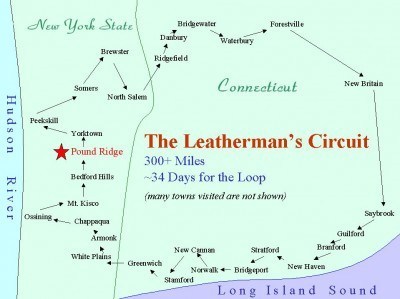 In the age of technical fabrics, van life, lightweight tents, campgrounds, and ergonomically designed backpacks, it is difficult to imagine what long-distance hiking and backpacking would have been like 150 years ago. But, one man was drawn to the lifestyle long before the current swell of recreators flocking to outdoors.

The Old Leatherman was a vagabond in the mid-1800s and walked a circuit, connecting the Connecticut River and the Hudson River, for over 30 years.

From 1857 to 1889, the leather-clad man walked ten miles a day, every day, and became famous for his homemade leather clothing. He wore a leather hat, scarf, shoes, and jacket. The leather came from old boot tops, and the mysterious man sewed them together himself. Weighing 60 pounds, the suit was far from ideal, but even in the summer months, the man was always wearing it and walking his route.

Despite the strange appearance, the Leatherman was always punctual, arriving at each location every 34 days. People could tell the day and time of the month by his arrival. There was no beginning or end but simply the continual 364-mile clockwise ongoing circuit.

Rock caves provided shelter, and small gardens and food caches were scattered periodically on the path. The route he walked had 40 different towns where the Leatherman could buy supplies and accept charity. One store owner had a log noting the man purchased “one loaf of bread, a can of sardines, one pound of fancy crackers, a pie, two quarts of coffee, one gill of brandy and a bottle of beer.” No one knew how he earned money, but he never seemed to be short of it.

As the year passed, the man became a staple of the communities he passed. Residents would give him food, and children would eagerly await his arrival. Soon towns called the day he came through “Leatherman Day.” His presence became a minor holiday.

The Leatherman had no other name. Talking in only short grunts of French or broken English, very little was ever learned about his true identity or why he chose to live this way. As with any unanswered question, rumors swirled.

Some thought he missed the chance to marry the love of his life after he lost a fortune in the leather business, and he walked the continuous loop as penance. Although unlikely, it illustrates the captivating effect of the nomad and the rumors that swirled around him.

At the time of his death, the man was carrying a French prayer book, and rumors swirled that he declined meat on Fridays, following Roman Catholic Traditions. Little more was known about the Leatherman, but much was speculated. In 1888 the Connecticut Humane Society arrested and hospitalized him out of concern. The medical diagnosis was “Sane except for an emotional affliction.” After the short hospital stint, he was released because “He had money and desired freedom.”

The Leatherman walked over 100,000 miles throughout 30 years of tramping. He survived blizzards by building fires in his caves and warded off most major afflictions common to other tramps during the time period. Despite the harsh lifestyle, the Leatherman never stopped trekking, and no one truly knows why. With only a touch of frostbite on his face, the man never lost a finger or toe—a rare occurrence in the time period for someone so exposed to the elements. He was adept at surviving in nature. But finally, in 1889, the body of the hiker was found in Saw Mill Woods Cave near Mt. Pleasant. At the estimated age of 50, the Leatherman ultimately perished from cancer caused by chewing tobacco.

The desire to solve the mystery of the man only grew after his death, reaching a climax when his body was exhumed in 2011. But, only a few nails were found. Even in death, the Legend of the Leatherman continues to grow.

The original thru-hiker had a versatile outfit, shelter, survival skills, resupply locations, and a trail name. The legend of one of the first long-distance trekkers and backpackers initially seems out of place. Still, it serves as an example that even throughout history, there have been people looking to escape to nature.

About the Author
Sawyer Ambassador Jeff Garmire is a hiker, author, and writer who lives in Bozeman, MT. Since 2011 he has hiked 30,000 miles and set 15 trail records. He is the co-founder of BackpackingRoutes.com and the author of the book Free Outside.

Backpacking Routes features long-distance routes from all over the country, sortable by length, region, and difficulty.