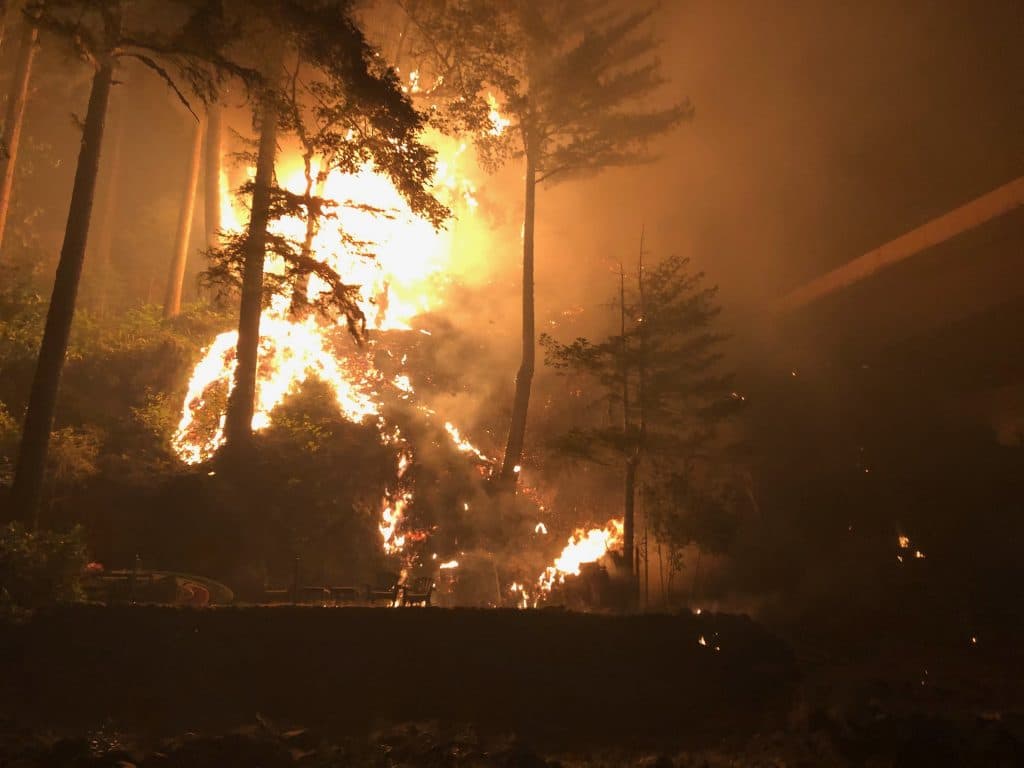 Photo of the Beachie Creek Fire by Don Myron

While driving through Utah I received a text from my mom, “It doesn’t look good for our cabin but nothing is confirmed.” Two hours later another text came through, “Our cabin is now shown inside the fire map. There’s no way to know for sure until this is over.” There were no answers, only questions.

In mid-August, a plume of smoke was seen within the Opal Creek Wilderness. The 10-acre area was given the name “Beachie Creek Fire.” Located in the wilderness and on the side of a steep hillside, the small fire was nearly inaccessible by foot. Helicopters dumped water, a fireline was dug by firefighters, and the expectation was that the fire would burn itself out.

The weather remained hot and dry. For three weeks the forest smoked, the acres smoldered and the size slowly grew. Then the wind started.

For two days the wind whipped through the Opal Creek Wilderness and down through Elkhorn Canyon. Powerlines fell, starting more fires. The nearby Lionshead Fire grew and soon merged with the Beachie Creek Fire. Within a matter of hours, the entire area had blazed out of control. Fighting the fire became an afterthought and evacuation was paramount. Frantic yelling, knocking, and racing around the rural communities became the sole job of policemen. But there simply wasn’t enough time.

My family was tracking the fire on Inciweb, safely out of harm’s way, but with so many emotional and tangible connections to the area. The sentiment quickly changed from optimistic to realistic overnight. The fire burned right down the canyon, demolishing every town along the way.

Mill City is the closest major city to our cabin and here are the before and after images of the area.

It moved so fast that not everyone was able to evacuate. In the canyon that my family’s cabin resides, there is only one road in and out. It is 12 miles of winding asphalt with caution signs at each turn suggesting 25mph.

The area was chosen by many residents because of its remoteness. News of the evacuation in the canyons and rural areas was complicated. Few households have internet and landline phones are often the only external communication. The same reasons it is a great place to have a cabin made it a difficult place to save.

Logging companies own most of the land that isn’t public and hiking, biking, running, and rafting are sources of recreation. Each season the logging companies unlock their gates and allow the residences exclusive use of the detailed network of gravel roads. It is the small community relationship that people only dream about.

Elkhorn Valley Cabin before the fire

The same day my mom alerted me our cabin was in harm’s way, she told me one of our neighbors didn’t make it out. One neighbor soon became three. Three separate households within a stone’s throw of our own cabin did not make it to the evacuation zone. The overnight evacuation was frantic, all on foot, and with no margin for error. There simply wasn’t enough time to alert everyone and get them out.

Sandy Johnson, Don Myron, and George Atiyeh all were trapped behind the walls of the fire and took action in different ways. All three of these people are neighbors that we knew on a first-name basis. Don’s son went on to work with my mom, we called Sandy every time we floated down the river in front of her house, and George was a wealth of knowledge on the Opal Creek Wilderness.

Sandy Johnson was watching her grandchildren and couldn’t get out in time. She is a member of the Elkhorn Valley Volunteer Fire Department and immediately took action. The younger grandchildren were equipped with a bucket of water and she and the older children took charge of the hose, wetting the house and continuing to spray every ember that came their way. Her house sits on a small peninsula and managed to survive the blaze. They successfully fought off total destruction and gained a lifetime of stories in one single night.

Smoldering logs after the fire had passed through the canyon

Don Myron jumped in his car and started up the gravel road to the asphalt that would lead him out of the fire zone. But his evacuation came to a sudden halt when down trees blocked any path out of the canyon. He stopped his car on a bridge over the Little North Fork of the Santiam River. It was 100 yards from our house. He had a choice between trying to hike 12 miles along the winding road or hunkering down and trying to safely survive under the bridge.

Don’s background as an outdoorsman rose to the occasion and he climbed down 70 feet and found rocks leading out into the small river. These rocks are on our cabin property and we spent many afternoons jumping off them. The sky turned orange and Don looked for a shield from the falling embers. Our neighbors had left a small lawn chair on the river bank and Don fought off the flames falling from the sky. It was a long night but ultimately Don remained physically unscathed. Two days after the event he sent this photo of our cabin burning to the ground.

Photo taken by Don Myron of our cabin ablaze

George Atiyeh was nicknamed the Guardian of Opal Creek. He is the godfather of the protection of the wilderness area and remembers the first time he saw the place, “I always remembered that moment in the trees. It was like they were talking to me...My motivation for everything was to save this forest and this stream,” Atiyeh said in a 2016 interview with the Statesman Journal. Atiyeh then did give everything to protect Opal Creek. Speaking about stopping the logging of the area he says, “I followed them around and pulled out their survey stakes. I stole their chainsaws and ripped down their flagging. We put snow in their gas tanks and would steal their lunch.”

After years of battling the forest service both on the ground and in court, eventually, he was able to get the area protected. But sadly after a life spent protecting the place, a fire started within it and eventually raged down the fire and took Atiyeh’s life. Unable to get out to the evacuation zone and hampered by recent injuries stemming from a plane crash, Atiyeh couldn’t escape the fire.

The record year of fire

2020 was the most destructive fire season in the history of Oregon. Over a million acres burned, and cost $354 million dollars simply to fight the fires. Eleven people died and 4,009 houses were lost. A number that is 43 times the previous five years combined. Nearly 90% of wildfires in Oregon are started by humans.

According to Science Magazine, human started fires spread over twice as fast as lightning induced burns and 97% of human-started wildfires threaten homes. It is a matter of proximity and severity. At the height of the fires in Oregon 5,600 firefighters were working directly on Oregon fires. The fire trend is increasing and unfortunately the record year of fires is likely made to be broken.
‍
About the Author
Sawyer Ambassador Jeff Garmire is a hiker, author, and writer who lives in Bozeman, MT. Since 2011 he has hiked 30,000 miles and set 15 trail records. He is the co-founder of BackpackingRoutes.com and the author of the book Free Outside.

Jeff grew up backpacking with his family in the Pacific Northwest. It was far from ultralight backpacking, but loading up 50 pounds each and hiking 3 miles to a lake to fish and camp for the weekend. At 2 years old Jeff got giardia on one of these trips, and on another he had so many mosquito bites the daycare thought he had chickenpox.

Backpacking went right along with fishing, building log rafts, and catching crawdads. The first thru-hike was when Jeff was 20 on the PCT, and since he has gone on to set 16 trail speed records and hiker over 30k miles.