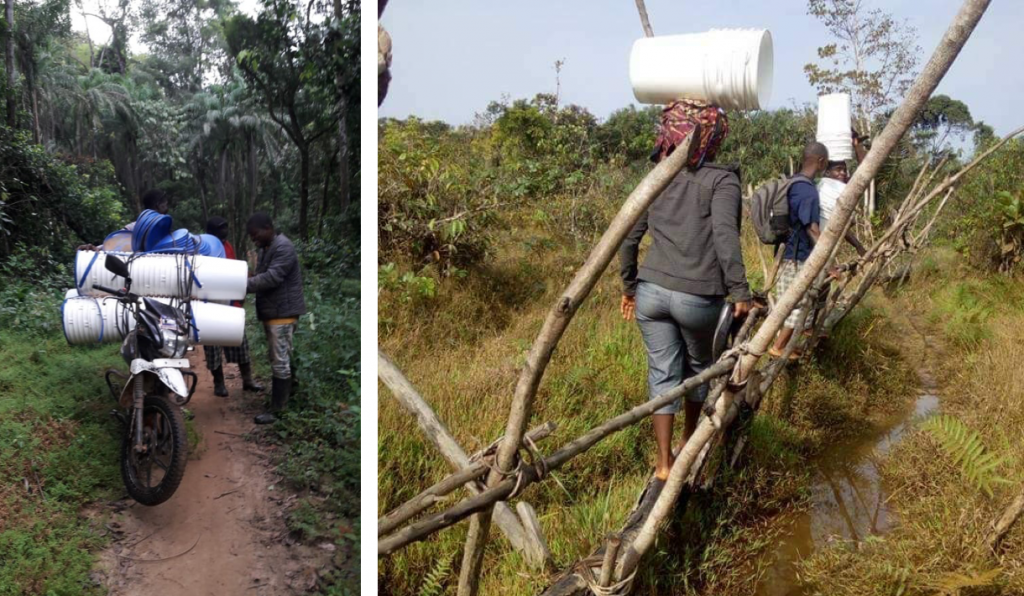 In Conversation with Elijah Harlie

In the quiet of an early winter morning in the PNW, I turned on a lamp and sat down at my kitchen table. The time on my stove read 4:55AM as a WhatsApp incoming call lit up my phone screen. Answering, I took a sip of tea and let the video call do its buffering. Sitting across the table and half a world away, Pastor Elijah Harlie was beaming, backlit by Liberia’s mid-afternoon sun. We exchanged laggy waves and greetings as our internet caught up, further revealing our considerable differences in dial-in locations.

Pastor Elijah is many things. Notably, he’s a father of three kids, a husband, and the pastor of a church in lower Bong County – the first district in Liberia where a Sawyer System was installed. He’s a self-described lover of people and works hard. Quickly into our conversation, it was obvious to me these two qualities led him to be a leader in The Liberia Project, a multi-year initiative to bring clean water to all of Liberia, border-to-border.

AG: Good morning, Pastor!
‍
Pastor Elijah: “Thank you so much for having me, and thank you to Sawyer for being a blessing to Liberia. It has been a blessing and a great joy to work with Darrel (Director of Sawyer International). He has been incredible over the years and he has been a very good guy to us. He’s a very good encourager and coach.”

Elijah flashes me his Sawyer t-shirt, as I throw a few fist-pumps. We both laugh.

What was your role in The Liberia Project?

As far as the project was concerned, I was the Project Manager for the Assemblies of God team. I was managing the project.

My role was a supervisor role to make sure the guys that have instructions on how to use the Sawyer system, know how to install it, and how to do follow-ups. I spent time with a few of them going into the bush, into the forest. [We would] get administrative reports, get the data all set up, and send the data to the GIS cloud.

(The GIS cloud is the data tracking system that allowed real-time collaborative mapping of households by county over the course of the Liberia Project).

It was our report to go to the bad places, go with the people, pray with them, and see that churches were seeded to be planted. It was a lot of data-monitoring.

Wow, that’s a lot to oversee. And when did you jump on board with this project?

Border-to-border clean water. That’s a wild idea. Totally unprecedented… Did the idea sound ridiculous to you at first?

Well, in my opinion, when we were told by Darrel that The Last Well was going border-to-border in Liberia, I was like “Are you crazy?! “Is that possible!?”

We both laughed, and Elijah continued.

“But, you know, the Bible says ‘all things work together for good.’

Elijah explained his mission to plant 600 churches by 2020, and the miraculous alignment of The Last Well’s vision for border-to-border clean water by 2020.

At what point did you realize it was actually going to happen?

From the beginning it was difficult. But, as time went on, it became easier. [It was] challenging because you have long distances and places you don’t like to go. Then you sit down and say, “wow.”

It was all incredible.

I can imagine. Just hearing the roadblocks and challenges you faced while in the bush, but then just the planning, analytics, and mapping out who/where are these communities, and repeatedly asking "how do we reach these unreached people?"

The program as a whole was designed to utilize Liberians exclusively for all of the in-country transportation, installations, training, and return visits. What impact do you think that commitment had on the program?

Well, Andrew, it had a lot of impact on the program. [The Liberia Project] made some of us travel to the life and breath of Liberia – to know it fully, and to know what kind of things people go through. Sometimes we traveled to places and walked for 9, 10 hours and just saw the forest. You have the Sawyer system with you, you have the buckets, you have other food to take along. You’re walking for 10 hours. It was not easy – it was tough. But it helped us.

We both paused to acknowledge the gravity of that transformation.

I imagine having Liberians train and share clean water with other Liberians, there’s trust. You can see the impact. If it were Americans coming in from the states, it’s like “Who are these people?” But when you have someone from your home country, there’s a brotherhood with a lot more trust and impact.

It was very effective. I still have the notes from Darrel, and sometimes I sit back and I reflect through the notes, thinking “well, Darrel is gone but in his seat is Liberia."

Well, many Liberian people did not expect the system to provide them with clean water. So many of our people live near creeks, rivers, and slums. We shed tears over some of the water they [previously] drank. The biggest surprise was when you take a Sawyer system to them, and you filter the water before them, they literally go into tears.

Their question is “why is this free?” Because it was free of charge, nobody had to pay anything for it.

Elijah paused again, and I felt goosebumps on my arm.

And they were like ‘Whaaaaaaaaaaaat?! Are you telling me we’re getting this free to save our lives?”

That was the biggest surprise we had in the bush.

Is there a specific story from the past 12 years you will replay for years to come?

I want to hear them all!

So the challenge is, you lift the motorcycle up. For 10 minutes, you carry the motorcycle on your head. And you cross that area. Sometimes you don’t have anyone to help you, and you sink right in the mud. If you cross while someone is passing by, sometimes they will get you out of the mud. And unfortunately also sometimes we go and sleep in the jungle. We are traveling distances where you get to a forest, and it’s something like 1 o’clock AM.

With memories sinking in, Elijah reiterated this.

“1:00 in the morning! Your feet are tired and you are exhausted. You take your thin, little sheet and lay it out on the ground. You take your bucket and lay your head on it as a pillow, you spend the night in the middle of the jungle on edge.

I shook my head and let a brief “wow” out.

It has been an incredible challenge. There are a lot of stories. Lots of things we can say about the challenges we are going through in Liberia - it has been a big challenge.

You know, I had heard stories of the Jungle Bikes before, and it sounded like some gnarly traveling. Is there a specific village or county that was particularly difficult to access?

Well, the last county we went to, which was really difficult to get to, was Sinoe. [It was a] great challenge for us.

Will you describe the route?

We used the jungle bikes! From where I live to Sinoe, it takes up to 15 hours. When you get to Kakata, you get on a dusty road to a place near the airport, about 1 hour 25 minute drive. From the airport, you detour on the left to a place called Decana, which is about 2.5 hours on a road. Once in Decana, we’d rest for about an hour, and then take off to another county called Rivercess. That’d take you about 5 hours, in the dark, on a very bad road. A very bad road. When you get to Rivercess, take the detour on your right to head to Sinoe.

This is something like 8 hours. Sometimes it is raining and the roads are bad, but you have to go.

Can’t just go to the easy places. Have to go to every single corner, right?

Elijah and I wrapped up our conversation celebrating the completion of the Border-to-Border project, addressing anticipated problems, and expressing our gratitude for all hands involved. After mutual waves, I closed the WhatsApp window to see the Central Oregon sun filtering in through backyard ponderosas. In gratitude, I thought of my new friend a few oceans away returning to his community with veils of dappled, jungled light.

At Sawyer, we believe every person deserves clean water. Thank you, Pastor Elijah, The Last Well, and the network of people who helped make this dream a reality for the entire country of Liberia.

For more on The Liberia Project, head to sawyer.com/liberia.