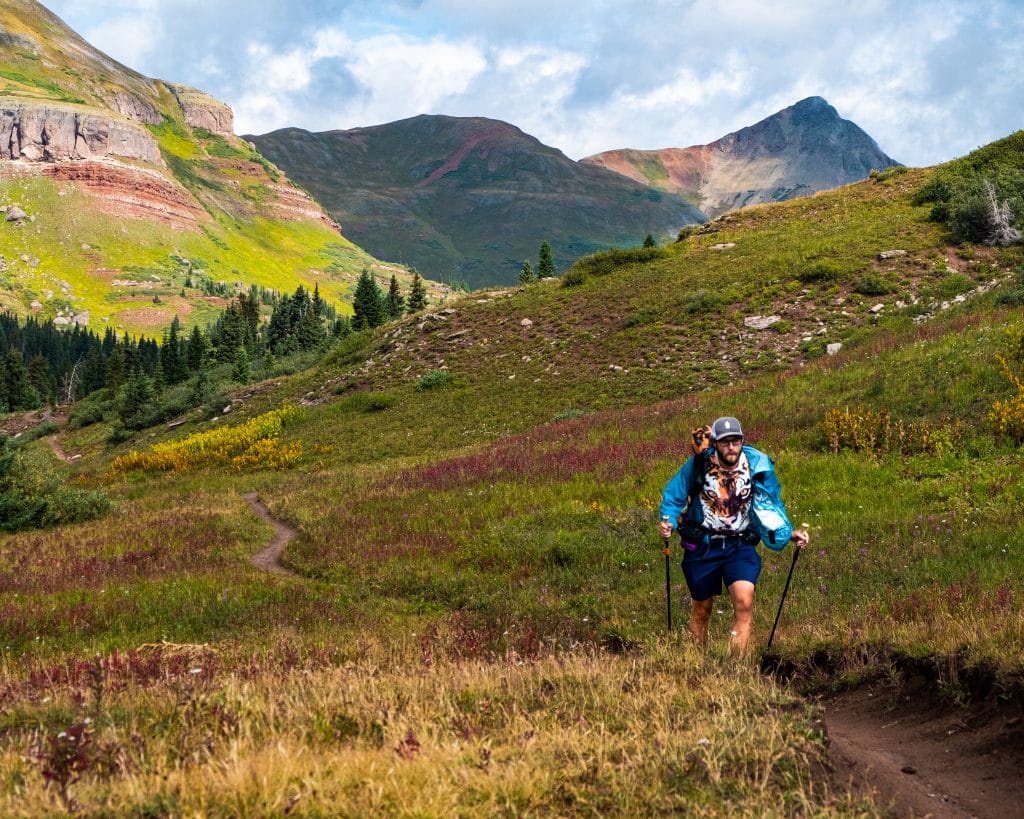 The first several days of witnessing my partner, Jeff “Legend” Garmire, on his Colorado Trail record felt celebratory. It was like cheering for a team you knew was going to win. Each time Jeff passed our film crew’s locations, he was ahead of their estimated schedule and appeared almost flawlessly capable, like the compounding miles had no impact on him. The cameramen would report back to me with giddy excitement, tripping over their words and interrupting each other to tell me how strong and unaffected he looked.

As the days wore on and the miles accumulated, the record became less fun to watch. Jeff was slowing down, sometimes so much that the crew would sit for hours in their hidden locations, waiting to catch a few seconds of footage as he crested a ridgeline or gained a switchback. I’d wait in a nearby town with a pit in my stomach as the crew’s tentative return time came and went. Eventually they’d straggle back, each time more somberly. It wasn’t that Jeff was behind the record pace, it was that the crew was now witnessing someone push themselves beyond the limits of what a human body should be doing. To beat the unsupported record, Jeff was hiking for 22 hours at a time, covering more than 50 miles a day.

It was the most savage feat of endurance I’ve ever witnessed. There was no denying that he was suffering immensely, entirely by his choice. “Jeff’s body is literally breaking down,” one of the cameramen told me, pointing to a speck on the screen that was Jeff. “But man—he’s still going.”

As it became nearly unbearable to watch, one question crossed my mind over and over: why doesn’t he stop?

Jeff succeeded in securing the record, and amidst the relief and celebration, I kept returning to that question, fixating on the idea that he had put his body through self-imposed torment, yet he kept going. This wasn’t a sanctioned ultramarathon, no one was paying him to do it. What we witnessed seemed like the cruelest endeavor to put your body through, in the name of a self-set goal. Who puts themselves through something like this?

In my mind, the next logical question was this: do people who push themselves that close to the edge register higher for symptoms of depression or anxiety? Do people who seek out these endeavors do so as a result of feeling a certain way? Do they operate at a lower setpoint that makes them more willing to suffer, or are they wired differently, and naturally apt to seek out these challenges?

Some of the top names in the endurance pantheon—Rob Krarr, Nikki Kimball—have been open about their deep struggles with mental health. Jeff has been public about his continuing work with mental health. Nikki Kimball spoke with brutal honesty about her struggles in Finding Traction, remarking on her depression being both a fuel towards her ultrarunning achievements as well as one of the reasons she survived some of her darkest times. Krarr’s struggles were notably profiled in a 2019 Outside feature. All of these athletes describe the extreme output of their backcountry endeavors as both a release and a contained, self-imposed type of suffering.

We already know that being in the outdoors and exercising are key components to positive and restorative mental health. What we are now seeking to understand is a deeper dive into the experience of the people we perceive as the toughest and grittiest ones out there. These are the athletes pushing their body to extreme limits for extended periods of time, under a time constraint.

Emma Horton is an accomplished ultrarunner who has experienced bouts of anxiety and depression for as long as she can remember. She believes that exercise can provide relief from free-floating depression and anxiety, either as a proxy or distraction.

“Suffering in an (endurance event) is a tangible experience,” says Horton. “In real life, there are painful experiences that don’t have a concrete start and finish, a training plan, or a mode of operations from start to finish.”

In extreme endurance challenges, the struggle is compartmentalized, contained. There is a clear reason the hiker or runner is exhausted or in pain: they have run 60 miles and they have 40 left. They’re on day five out of a 10-day push. They’re falling behind in their goal and have to forgo sleep. That dark space in the mind and the physical pain is coming from a pinpointed location. There is causality and thus the pain can be controlled. There is both a reason and an end.

“Physical pain and exhaustion are very straightforward things to train for,” she says. “There is a limit for how bad your physical pain or exhaustion can be. My worst day on a run isn’t as bad as my worst day with depression.”

Rebecca Sperry, known as “Socked In” to the hiking community, discovered the challenge and austere beauty of New England hiking during a period of intense mental health challenges, and has since built her recreational existence around a gritty drive to push herself solo year-round in the mountains.

Sperry’s history with mental health includes decades of dealing with diagnosed panic disorder, which comes with anxiety and various phobias. This past year, Rebecca took on the extreme challenge of the Single Year Redline. This meant she was attempting to hike all of the trails in the White Mountain Guidebook, which ends up being around 1,800. Redlining is a niche New England endeavor, and is usually something people spend a lifetime working on.

“I pursue challenges like the single-year redline to push myself mentally. I want to see how far I can take things,” Sperry says of the challenge. “It amazes me time and time again just how much I can take mentally.”

Elite athletes are looked up to, idolized at a certain level. They embody a fierceness and untouchable quality that sheds the potential for weakness, which has created an aura around them that doesn’t leave space for personality traits and struggles that could be perceived as “weak.”

The ability to push through intense physical challenges isn’t limited to people who have experienced dark periods of mental health, but having fought through those times and come out on the other side can assist in present athletic challenges. “Taking on extreme things is my way of throwing up the middle finger to my panic disorder,” Sperry says. “It’s a way to say ‘you're not going to rule my life anymore.’ ”

Whether it’s a coping mechanism, a predisposition to put themselves through intense challenges, or an ability to “suffer better,” Rebecca believes that ”taking on physical challenges helps athletes process things, gives them something positive to work towards and shows them how strong they are both physically and mentally.”

An endurance event within a specified time frame—an FKT, a single-year redline, an ultramarathon—takes an incredible toll on your body. There is pain and heightened levels of sensation and suffering. But in this suffering, there is also accomplishment, and the entire experience is contained.

“Suffering is a tangible experience in endurance,” says Horton. “Conversely, there are painful experiences in life that don’t have a start and finish, a training plan, mode of operations. Those are the greater struggles of just being a person.”

In their challenges in the mountains, athletes are solving a problem of their own desire and creation. Their singular focus is a drive to reach the finish line, whether it’s crossing off trails in a book, clocking hundreds of miles under a certain time, crossing under a banner at the end of a race.

Endurance athletes are regarded in such a way that their willingness to discuss their experiences means less people feel alone in a struggle experienced by so many. This is just the start of a conversation surrounding the subject, and with more openness from athletes and the trickle-down effect into all tiers of the endurance world, the stigma is letting up.

The more we talk about these things, the less taboo the discussions become, and the more can be understood about the ways people deal with struggles and process their own internal challenges.

About the Author
Maggie Slepian is a full-time freelance writer based in Bozeman, Montana. She is the co-founder of BackpackingRoutes.com, and is tentatively planning four thru-hikes for 2021... in the name of website research. Follow her on Instagram here, and find writing clips and contact info at Maggieslepian.com

Doherty S, Hannigan B, Campbell MJ. “The Experience of Depression during the Careers of Elite Male Athletes.” Front Psychol. (2016) 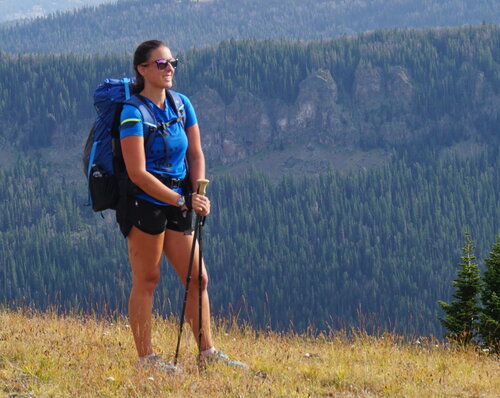 Maggie Slepian is full-time writer and editor based in Montana. She has backpacked thousands of miles around the US, and is an avid bikepacker, climber, and mountain biker.

Her work has appeared in Outside Magazine, Backpacker Magazine, Huffington Post, New York Magazine, Popular Mechanics, REI Co-op Journal, and others. Her clients range from brands such as Osprey, Marmot, and KOA to the Appalachian Trail Conservancy and Montana Wilderness Association.

Maggie has tested gear professionally for the past seven years and is the co-founder of BackpackingRoutes.com. When she isn’t writing, she’s hiking an obscure trail or teaching her cat to walk on a leash.