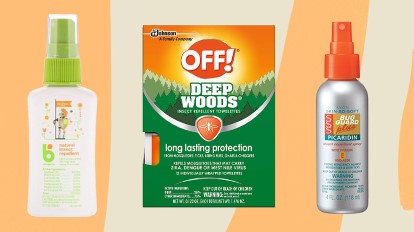 Nothing will send you running inside on a nice summer night faster than pesky, persistent mosquitos. And while a good bug spray can help protect you from masses of itchy bites, you may wonder if it’s suitable for your baby’s sensitive skin.

The short answer: The American Academy of Pediatrics (AAP) says you can use bug spray on your baby — as long as they’re at least 2 months of age and the formula doesn’t contain more than 30 percent DEET. Also important to know: Bug sprays that contain oil of lemon eucalyptus (OLE) or para-menthane-diol (PMD) are not recommended for babies under 3 years old.

Here’s everything parents and caregivers need to know.

When does your baby need bug spray?

Your baby doesn’t need bug spray every time you venture outside. Infants may benefit from insect repellents especially when they’re at increased risk of insect bites that could result in infections, like in areas where mosquito-borne illnesses (such as the Zika virus or dengue) are common, says Leah Alexander, M.D., F.A.A.P, a pediatrician based in New Jersey. (The same goes for areas where tick-borne illnesses, such as Lyme disease, are prevalent.) Of course, an insect repellent can also be used when those tiny insects are swarming to keep your little one more comfortable during — and after — your family’s outdoor activity.

Types of bug spray for babies

When selecting bug spray for your child, it’s prudent to follow safety guidelines and choose the right formula:

You might also find some products that are bug spray-sunscreen combos. While this might sound like a good idea in theory, these products should be avoided since you need to reapply sunscreen far more often than you need to put on bug spray, according to the AAP.

It’s also important to apply bug spray only to exposed skin and on clothes (not under clothes) and to wash it off when your little one comes inside. Parents should also wash kids’ clothes before wearing them again to prevent skin sensitivity, says Tina Feeley, M.D., M.P.H., a pediatrician based in Chestnut Hill, Massachusetts and member of the What to Expect Medical Review Board.

Media Mentions from What to Expect

Your go-to resource for preconception, pregnancy and parenting advice.

What to Expect is the world’s best-known, most trusted pregnancy and parenting brand, helping every parent know what to expect, every step of the way. Building on the bestselling What to Expect book series by Heidi Murkoff, What to Expect Digital reaches over 15 million parents and parents-to-be each month with its popular website and top-rated apps for Android, iOS, and Amazon Echo.