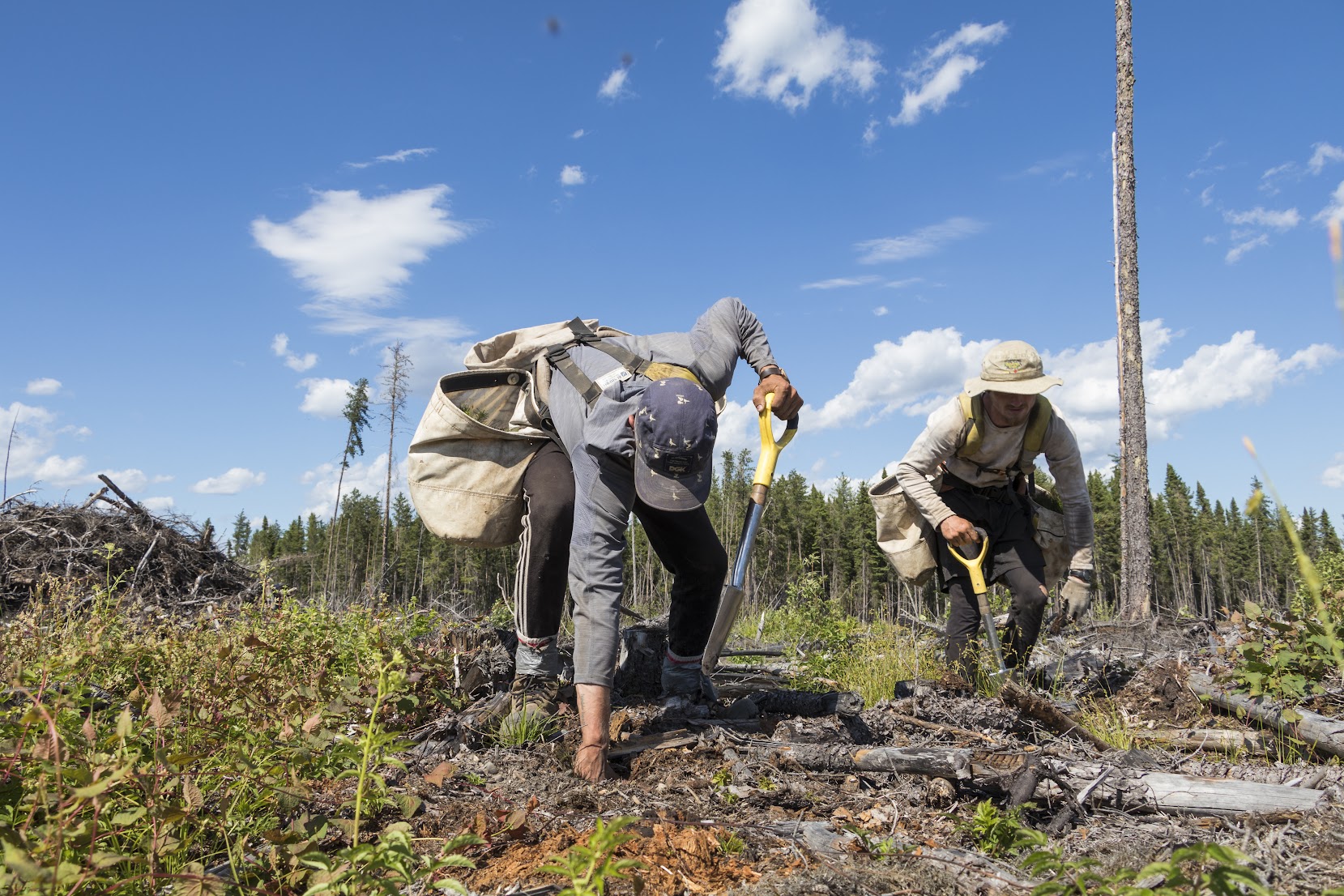 Imagine waking up in a damp tent, still wearing your work clothes from the day before. You rub your eyes, crawl your way out of your sleeping bag, and slip on your wet work boots. After groggily making your way to the mess tent and consuming a high calorie breakfast, you hop onto an old school bus with the rest of your crew and head out to the block. You are dropped off, alone, at your cache where you load your planting bags with tree saplings. You heave the heavy bags onto your body, slipping your arms through the straps and clasping the belt together around your waist. You grab your shovel, head into your piece, and begin to plant for the next 8-10 hours. While attempting to ignore the swarms of blackflies that hover around your face and the deer flies that try to bite chunks out of your shoulders, you continue to plant, knowing that each tree contributes to your paycheque. It’s hard work and you want to quit. But you don’t. Because at the end of the day - exhausted, dehydrated, and hungry - you know you’ll be back with your crew cracking open a beer, laughing off the dread of the day, and ignoring the fact that you’ll be doing the exact same thing tomorrow.

Every year, thousands of individuals join companies across the country to plant trees. Men, women, recent high school graduates, university students, wanderers, recent professionals, and everything in between: these are the people who choose to live in the Canadian wilderness for 3-6 months planting trees. Planting is not a job for the fainthearted; rather, it requires grit, the ability to thrive in the midst of uncomfortability, and the mental stamina to crawl your way out of the inevitable desire to quit. Planters go out in rain or shine, snow or blistering hot sun, and tackle the obstacles that come with planting Canada’s unpredictable terrain. They will walk an average of 15-20 kilometers per day, carrying up to 50lbs of weight in tree seedlings on their shoulders and hips.

The terrain could be flat, mountainous, barren, thickly overgrown, and/or covered in obstacles you need to climb over, crouch under, or push through. A variety of trees are planted depending on the terrain and purpose of the contract. Pine and spruce varieties are amongst the most common types of trees planted. A typical tree can be held in the palm of a planter's hand, with the pod ranging from 2-4 inches in length. Planters earn an average of 9-25 cents per tree, depending on the contract. Each planter will bend down on average 2000-3000 times per day, slicing a small opening in the ground with their shovels, sliding a sapling down the back of the blade, and stomping the hole closed to successfully plant a tree.

‍This action is repeated all day, every day, until the last tree of the contract is planted.

Physically demanding work typically evokes the thought of a large male workforce; however, females are a large portion of the planting industry, making up almost 50% of the planter workforce.* From cooks, to planters, to supervisors, females are taking up space in a once male-dominated industry. And that’s exactly what Céline Rytz is doing. Céline has been in the planting industry for several years and rather than becoming a “crusty vet”, she comes back each season with the same amount of drive and positivity.

Just wrapping up her 10th season in the bush, Céline has fully embraced the life of a tree planter. Resiliency, passion, and expectation have come to characterize her participation in one of the most physically and mentally demanding jobs Canada has to offer. Encouraged by her grandfather, a former forester, and his passion for the outdoors and environmental preservation, Céline decided to give tree planting a shot. Céline’s natural desire to be immersed in the wild, paired with her competitive spirit, set her up for success in the planting world. 10 seasons later, Céline has planted across Alberta and British Columbia and has gained experience as a planter, ombudsman, Occupational Health & Safety Advisor, crew foreman, and supervisor.

Céline describes tree planting as a “mysterious, bizarre, and uncouth world that is well hidden from the outside world.” The job itself lacks the influence of societal norms that people typically operate within the day-to-day. Instead, she views planting as a boundaryless experience that people are drawn to. Céline considers tree planting to be the “ultimate equalizer,” explaining that “...anyone who has tree planted has gone through major shifts in perspective, ego-deaths, and self-realizations that would not have been possible without having a space so wild and rugged to lean into.”

The job is dirty, arduous, and exhausting. The weather is extreme, the wildlife can be aggressive, freak accidents occur, tensions rise amongst fellow planters, parties rage all night into the morning, and yet there is nowhere else Céline would rather be.

The sense of oneness Céline experiences with her wild surroundings draws her back each year - a feeling she considers to be the “call of the wild.” Over the past 10 seasons, she has developed a strong sense of gratitude and connection to the earth.

“I love feeling embraced by my surroundings,” says Céline. “Becoming familiar with the smells of all the trees in the morning, the sounds of the birds nesting above you, the colours of the spring flowers as they take turns blooming, learning the behaviors of wildlife around you, the names of the mountain ranges and rivers... I have always been most excited about identifying the different flora and fauna while tree planting. By educating myself about what I am surrounded by, I feel like I can truly appreciate everything more fully. Picking bouquets of cutblock wildflowers might make my heart the happiest.”

Considering herself and other planters to be stewards of the forests, she feels humbled when returning to old cutblocks. Seeing the trees she’s planted in previous seasons (trees that are now taller than her) is what she considers to be one of her proudest accomplishments in life.

Being in the industry for 10 seasons is a huge feat in itself. Though with personal growth and hard work also comes the challenge of imbalance and proving yourself as a woman in the industry. Céline received push-back from men in her earlier seasons when she was pursuing a foreman and supervisor position. When inquiring about the crew boss position, her supervisor explained that she was “too nice” and would not have the ability to lead men in a demanding work environment. Rather than letting his words affect her desire to pursue the job, she took it as a learning opportunity.

Céline learned that “successful leadership does not come as a result of aggressive macho control. Females have the capacity to provide compassionate leadership, develop planter potential, and diffuse stressful emotions by leading with fairness and integrity.”

Céline also learned these ideals from a past foreman - a woman who she believes to be one of the fiercest individuals she has ever known. Céline explained the importance her foreman carried within the industry and how she ultimately inspired her to be a stronger, more confident planter. Her foreman, Cloé, was “wild and unruly.” Cloé took up space, had little tolerance for bullshit, and intimated the men that doubted her. Céline believes that for those who are “unfamiliar with strong and powerful women, Cloé could be labelled as an untamable force who was not to be messed with.” Cloé was brave and commanding, something that young Céline aspired to be. Céline admired her leadership style and the ability to be strong, yet gentle. She credits Cloé for feeling like she had the permission to grow, to understand her own capabilities, and in recognizing that tenderness should never be mistaken for weakness.

“Cloé, if you’re reading this… thank you.”

Planting for 10 seasons has allowed Céline to witness and experience change within the industry, especially in relation to how planters are treated and looked after. When she first started planting, there was very little support and awareness for  issues such as consent, sexual harassment, mental health, injury prevention, safe drug/alcohol consumption, and emergency response training. Céline has been able to secure upper management roles that have given her the autonomy to make the changes she desired to see in camps. She’s happy to have witnessed positive changes being made in the industry, including individuals being  trained and roles being delegated to those who are passionate about making camp and planting a safer experience for all.

Not only has Céline worked towards making camp and planting safe for planters, but she has worked tirelessly in making the planting experience safe for dogs. Several planters, crewbosses, and supervisors bring their dogs to the plant, but are unaware of the potential risks their pets face due to the unique environment they live in. Céline witnessed an emergency where a dog was accidentally run over by a work truck. The dog sadly succumbed to its injuries over time, and the suffering the dog endured deeply impacted Céline. This experience inspired Céline to take action in order to advance responsible pet ownership through a variety of resources. She is currently working on launching her business, which supplies dog-specific first aid kids in remote forestry workplaces and backcountry wilderness. She hopes the first aid kids will not only provide supplies, but also educate owners in emergency preparedness and injury prevention.

Céline’s love for the industry is evident. It is reflected in the way she feels connected to the earth and her surroundings, as well as the care she extends to fellow planters and their pets. She started as a rookie with a simple desire to spend her summers outdoors, and has since touched several levels of the industry, making the plant a safer experience for everyone involved. She is wild and unruly, preaching kindness and humility, and reflecting the importance women hold within the industry. Céline is a reminder to get outside, get dirty, plant some trees, and make a difference.

https://www.agreforestation.ca/tree-planting.html (55% male, 45% female crew). These stats can be found on most tree planting company’s websites. There isn’t an official ratio on male-female/statistics online.

Craft beer enthusiast, thru-hiker, adventure-junkie, & aspiring journalist. I have a passion for the outdoors and immersing myself in wild space. When I'm not travelling and documenting my adventures, I'm chasing stories about inspiring individuals and sharing them with the world through the use of storytelling and videography. From the tip of Mount Kenya to the trails on Ontario, I believe there are stories across the globe worthy to be shared.