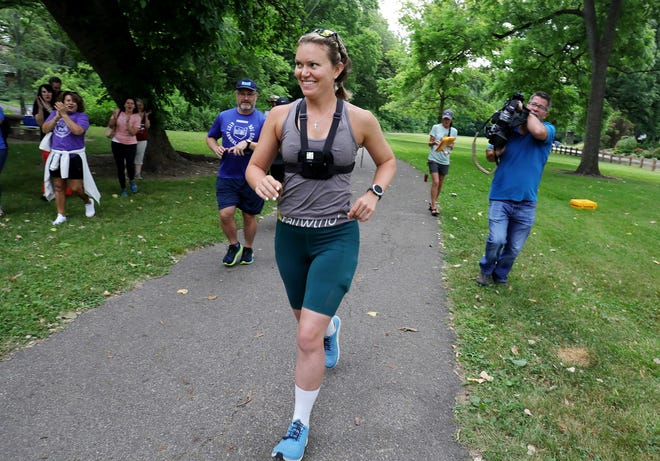 Surrounded by supporters, endurance athlete and clean-water activist Katie Spotz set off from Glenview Park on the West Side on Friday on her fifth of 11 ultramarathons.Spotz is attempting a world-record 11 ultramarathons in 11 days, spanning 341 miles along the Ohio to Erie Trail in this Run4Water challenge.

Though she’s experienced challenges with soreness, spotty sleep, calorie intake and lost toenails, Spotz, a Lt. Junior Grade Coast Guardsmen, said that running her first 124 miles has been easy. Every day is better than the next, she said. “It's been a really awesome journey just meeting people along the way, seeing the beauty of Ohio, and [I] love knowing that every turn, is a new scenery, a new area, to explore,” she said.

So far she’s raised 85% of her $34,100 fundraising goal, totaling $29,039.95. The money will fund 11 clean water projects in Ugandan communities, restoring wells and rain-catching tanks with filters to aid over 5,000 people.

Nick Coughlin, the Director of Communications for the Minneapolis-based service-learning organization H2O for Life, which is sponsoring Spotz, said that he’s amazed to see the amount of support Spotz has received and how many people she’s inspired just halfway through her race.

To support Katie and her Run4Water efforts, head here.