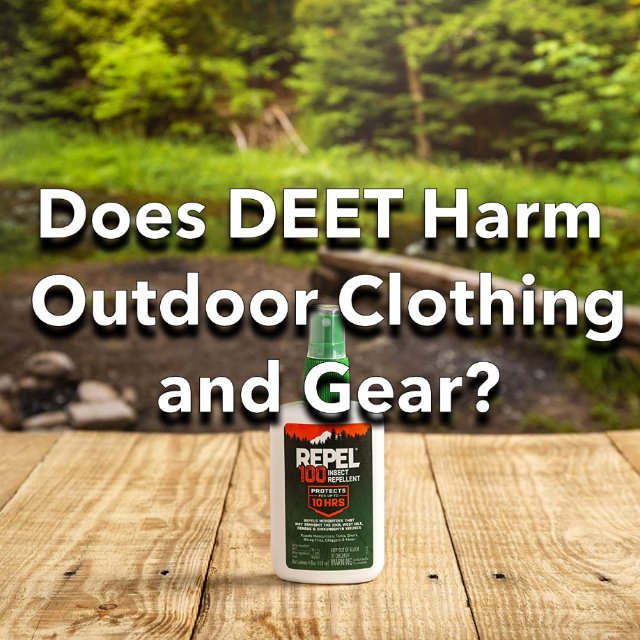 DEET in all concentrations can harm outdoor gear and clothing made with synthetics, like nylon and waterproof/breathable membranes, as well as plastics. It doesn’t harm outerwear or gear made with natural materials, however, including cotton, wool, aluminum, or steel.

While DEET is safe to apply to your skin as an insect repellent, it’s not designed to be applied or sprayed-on clothing or gear. If you do get it on your finger and hands, it acts as a solvent and may dissolve or permanently fog plastic glasses lens including sunglasses, watch crystals, or GPS and Satellite Communicator screens. It can also damage or even dissolve rain gear and any clothing or gear that includes spandex, rayon (also known as viscose), rubber, latex, vinyl, and elastic.

Unlike DEET, Picaridin is safe to use around plastics, synthetic apparel, and gear with synthetic coatings such as sunglasses, watches, GPS units, or phone screens. Picaridin became available in the United States in 2005 and is used widely in Europe as a replacement for DEET. It repels mosquitoes, ticks, biting flies, sand flies, gnats, chiggers, and midges. The most effective concentration of Picaridin is 20% and will last up 8-12 hours before repeat application is required. It’s also safe for children over 2 years of age and pregnant women.

I switched to Sawyer Picaridin five years ago, after using Ben’s 100% DEET for many many years, and there’s no difference in its effectiveness as an insect repellent. I made the switch because I got sick of the damage that DEET made to my outdoor navigation gear including watches, compasses, and GPS units. It just got expensive to keep replacing after a while.

Permethrin – For Clothing and Gear

If you have clothing or outdoor gear that you want to make insect-proof, the best way to treat it is using a product called Permethrin which doesn’t hurt your gear like DEET. Permethrin is sold as a spray-on (Sawyer Permethrin) or as a liquid in bulk (JT Eaton) that you can soak items in. It actually kills mosquitos and ticks that land on clothing treated with it, as opposed to just repelling them. Permethrin lasts for 6 weeks when you apply it yourself. I’ve sprayed it on socks, gaiters, shorts, pants, and hats. I’ve been using it for over a decade without any ill effects. I know people who spray it on their tents and tent footprints too.

If you want a more permanent Permethrin treatment, you can also send your clothing to Insect-Shield which has a special process that will last for 70 washings. In other words, it will remain effective over the span of years. You call also buy outdoor clothing that has been pretreated with Insect-Shield (also called BugsAway, Noilife, etc) which I’ve also been doing for many years. If you wear clothing that has been treated with Permethrin or Insect-Shield you can cut way back on the amount of insect repellent that you have to apply to your skin. I hardly use any anymore, unless the bugs are really bad. 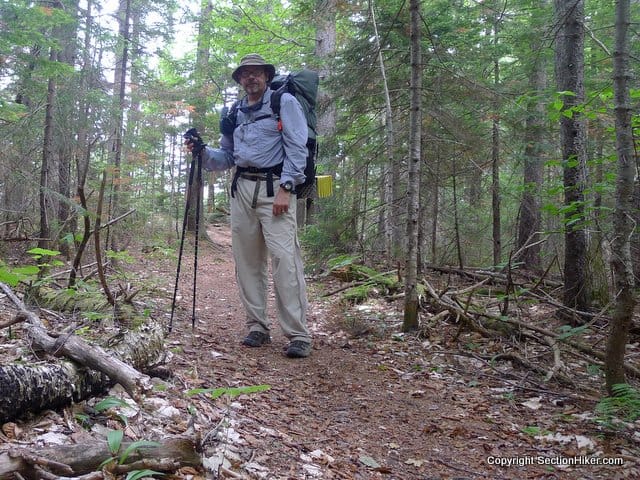 Philip Werner is a full-time outdoor author and backpacker who resides in New England. His website SectionHiker.com is ranked as the #1 Hiking and Backpacking Blog on the internet by AdventureJunkies.com in 2018, 2019, 2020, and 2021.

The name of this site, Section Hiker, refers to the Long Trail which I section hiked in 2008 and the Applachian Trail that I’m still working through. To date, I’ve completed 1400 miles of the AT and hope to complete all of the sections between Georgia and Maine someday. I’ve also hiked thru-hiked the TGO Challenge (Coast-to-Coast across Scotland) twice and I’m currently section hiking the Cape Wrath Trail, also in Scotland.