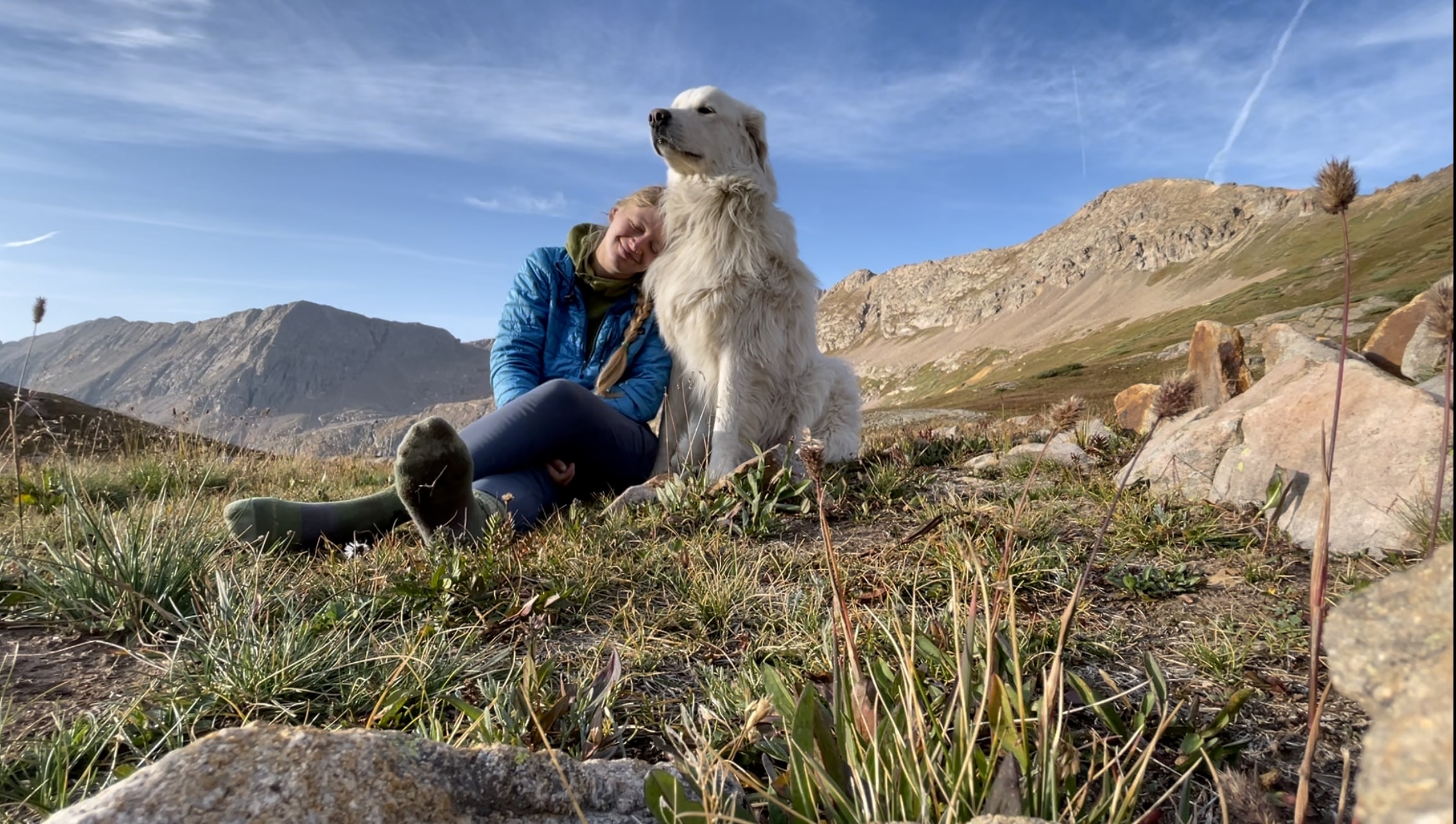 I grew up in wild places. My parents met as park rangers in Grand Teton National Park, and my family moved to Northern Minnesota when I was 12, where my mom began working for a wildlife refuge and we spent an abundance of time on the lakes my dad grew up on. Because of my parents, I fell in love with being outside at a young age, and my upbringing also gave me the confidence to travel solo in the backcountry as I do now.

Mental illness also came to me young: according to my journals, I was 11 when I first began to have suicidal thoughts. I told my parents throughout my early teenage years that I felt I had a severe chemical imbalance, but ultimately we attributed this to hormonal dysregulation as I had also been experiencing period problems that would later be diagnosed as advanced endometriosis and early adenomyosis.

When I first began seeing a therapist in my early 20’s, the diagnosis was major depressive disorder, and I did not seek or receive further psychiatric evaluation or medication - back living in the West, I felt I could mitigate the chronic conditions by spending nearly every second of my spare time outside. In hindsight, I believe that my spending most weekends traveling 5+ hours to hike 30+ miles at a time may have been a result of hypomania, a teetering between this world and beyond the veil, pushing myself to exhaustion in order to quiet my mind. I’ve found backpacking and hiking served as catalytic grounding points when I’ve felt myself spiraling, even when I couldn’t name why the spiral was occurring.

These excursions ultimately weren’t enough to keep me grounded, and after witnessing the death of a loved one in 2018, my mind began to play more serious tricks on me in the form of creating false memories, noticed first by those close to me. Within a few months, my body also began to fray and I was repeatedly in and out of the emergency room for endometriosis-related issues, which resurfaced after a 2.5 year recession period. This propelled me to search for specialized care that I was unable to receive in the state I was residing in, and so I applied and was accepted as a patient in the Mayo Clinic’s Chronic Pelvic Pain Clinic.

I moved to Saint Paul, MN in January 2020, and my depression began to take firmer hold when the initial pandemic stay-at-home order was placed that March. I distinctly remember staring at the oven and unironically thinking that “maybe Sylvia Plath had the right idea.” I shared these obtrusive thoughts with those close to me and my therapist. Weeks later, I received a psychiatric evaluation to try antidepressants in order to cope with the horrors of the pandemic alongside facing another surgery for my pelvic problems. Focusing heavily on death as it surrounded us all, I took extreme strides for an otherwise healthy 28-year-old. I appointed my younger brother as Power of Attorney, created a contact list, and outlined my last wishes. I was absolutely terrified of going in and out of a hospital during these months, and also deeply knew that I needed to seek the care I’d been afforded as both my body and mind were crumbling.

In May 2020, I was hospitalized in a psychiatric unit for the first time, triggered by a manic episode that was likely caused by the antidepressant I had recently begun taking (although the quick upswing from a Minnesota winter to spring could also have been culpable). This resulted in a new but unsurprising diagnosis of bipolar type I with psychotic features.

I was put on heavy doses of Lithium and Zyprexa, and the following months are still a hard blur of living in the pandemic, losing a job, having (yet) another excision surgery for endometriosis, and trying to manage a new medication regime that caused me to sleep 12+ hours a day and quite literally turned me into a shell—I was awake, moving, but my consciousness felt dimmed to its lowest setting.

In an effort to feel more like myself, I tried adjusting my medication dosage over the summer, but was quickly dropped back into a couple days of manic delusions and paranoia, with an immediate re-upping of the dosage to keep me out of the hospital. My doctor made more changes to my medication regimen over the coming months, and these trials brought me to dark places, with voices, suicidal ideation, and auditory and visual hallucinations frequenting.

‍I went to play outside during these months, and hiked only slightly less than my normal seasonal average, but everything was wrong. I didn’t feel like I was in my body.

Enthusiasm for anything was lost, and I repeatedly and hollowly told myself,  “you used to enjoy this, maybe you still do.” Chronic illness wasn’t a new or scary concept, but I severely felt the chemical shifts that come following a psychotic break. I found a new doctor, but in April 2021, I was hospitalized for a manic episode for a second time, again with a medication-coupled-with-seasonal-trigger, and following both a sexual assault and losing a family member to complications of depression in the preceding months. Once more, I was yanked back to reality with a heavy dose of antipsychotics and sent home within the week. During this year’s recovery, I worked with my doctor to help me re-calibrate my medication dosage successfully (no more anti-depressants, keeping Lithium for mood stabilization and shifting to Seroquel for antipsychotic management). Within weeks, I was feeling more grounded and authentically back to myself than I had felt in over a year.

Finally feeling stable, I was eager for this past summer’s wanderings. With support from Sawyer and other brands, my polar bear companion Chama and I trekked along the Superior Hiking Trail in Minnesota and into the Weminuche Wilderness in Colorado, and these trips highlighted a surprise I wasn’t expecting: while I had enjoyed these ventures and places before and continually found them full of magic and wonder, this season was remarkably better. Similarly to stories of people receiving corrective vision and seeing clearly for the first time, I discerned that my pre-medicated years had been spent in a sort of gauzy, curtained haze that I had now pulled aside. I’ve since found that when on a medication routine that works for my systems, alongside my doctor’s and therapist’s support, the experiences I love have become elevated. I’m able to trust securely in my fortitudes and find full grounding in these trips. The trees and waters and mountains felt closer to sweet, dear friends and my relationship to recreation shifted from simply finding myself in beautiful places to tapping into those magical moments of unbridled joy.

I often hear people talking about spending time outdoors as “self-care,” beneficial for one’s mental health. While I whole-heartedly agree with these sentiments, I feel that there is something missing from this conversation.

Self-care is a wonderful and privileged practice, but the conversation of what differentiates between mental health and mental illness is what I find lacking. For psychiatric illnesses such as bipolar or schizophrenias, mental health is viewed first as clinically managing a severe illness. Bipolar I is diagnosed after a person experiences at least one manic episode, usually preceded by depressive and/or hypo-manic episodes. The ‘psychotic features’ of the illness are limited to manic states. Without proper medication use and intervention, complications include substance use disorder, suicidal ideation and attempts, and overwhelming impact over all aspects of a person’s life. Jamie Lowe in Mental provides the lens that Lithium is comparable to insulin for those with diabetes: “Once it was explained that this was an element in everyone’s body and that I just needed more, the three pink pills in the Dixie cup didn’t seem so bad.” The illness’ manifestation in my systems have illustrated just how easily one can slip back into mania and psychosis, and how closely I need to be aware of any shift in symptoms.

I notice most when managing this illness becomes a chore during outdoor preparation. The standard definition of “only the essentials” shifted with the understanding that I cannot be without my meds, not even for a day. I now have to prepare for the worst of injury or unplanned extra days in the wild with an overflow of extra medication, alongside the typical med bag, extra food, and knowledge of nearby water sources. Medication is an absolute for my wellness and safety. Incorporating years of mindfulness practices, I continually check in with myself to be sure I’m mentally well enough to even be alone in the backcountry: questions of “when did I last have intrusive [suicidal] thoughts?” and “what is the intention for this trip?” And, I have to factor the worst of the worst - what happens if I am stuck and run out of medication? How will I be able to glimpse or find reality to grasp so that psychosis doesn’t overcome me when alone in the wild? Who will feed my dog if I’m off traveling in a multiverse? Will I remember to feed myself? While I know that my dog becomes a spiritual figure when I’m experiencing a manic episode, I can only grasp at other delusions I may encounter.

Consistent medication usage has enabled me to think with increased clarity and more critically, which aids in providing an honest risk assessment for myself and the wanderings I pursue. Safety and risk mitigation has fully shifted as I acknowledge that my mind will readily betray me into dangerous places. I anticipate my medication journey to shift with time and the seasons, as all relationships do. I have said often with my experiences with Endometriosis that one must first take care of oneself so that care can extend to others, and I’ve incorporated this thinking when facing Bipolar and its symptoms.

This past year’s wanderings have continued to encourage rest and ease in my relationship to recreation. I’ve learned to allow myself to incorporate space and honor the daily nuances and fractures of my body and mind as I do with changing weather, all with incredible support from the Thru-Hike Syndicate and brands alongside Sawyer.

I’m fortunate that I have been able to pursue and have access to exquisite medical care, and cannot emphasize enough the importance of finding a physician that listens to you and your body’s needs, especially when living with chronic illness. As Esmé Weijun Wang closes The Collected Schizophrenias: “if I must live with a slippery mind, I want to know how to tether it too.” 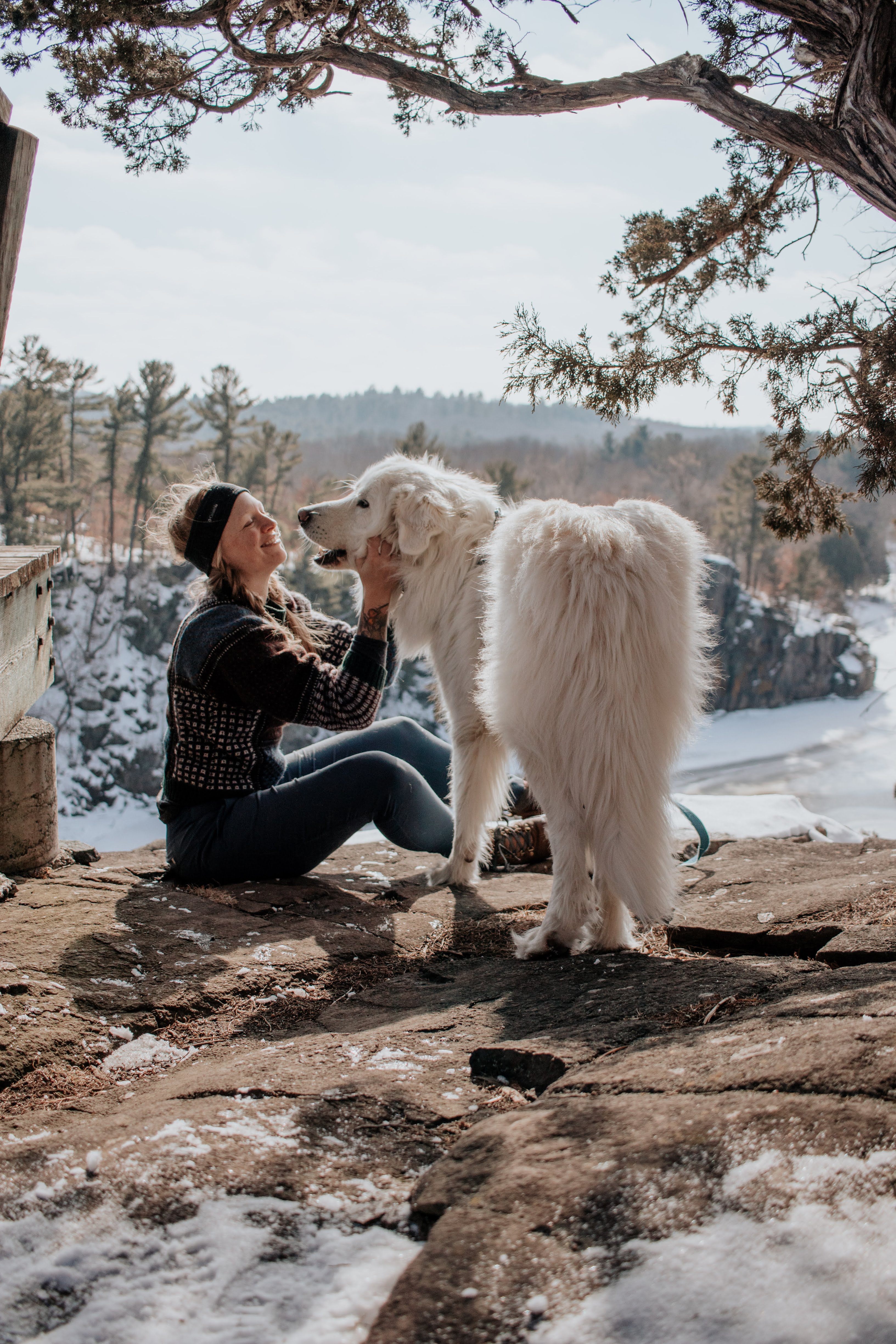 Laura Pancoast has spent most of her life outside and works for the USFWS Wildlife and Sport Fish Restoration Programs in the Midwest Region. Since relocating to Minnesota in early 2020, Laura and her polar bear pup Chama have found respite in the art of wintering, and were members of the 2021 Thru-Hike Syndicate cohort (Chama was honorary). Laura is in ongoing recovery from mental health crises, and will be proudly celebrating a sobriety milestone in March 2022. Please visit DBSA Alliance and NAMI for local and nationwide resources for individuals and their families most affected by mental illness.

Steer clear of mosquitoes, ticks, and other pests with these EPA-approved bug sprays, lotions, and wipes.

This insect repellent lotion uses picaridin, which repels all sorts of biting flies, chiggers, ticks, flies, and gnats. It’s not greasy, feels good on your skin, and comes in packets that are easy to take along when you’re camping or hiking. It gets over 16,000 five-star reviews.