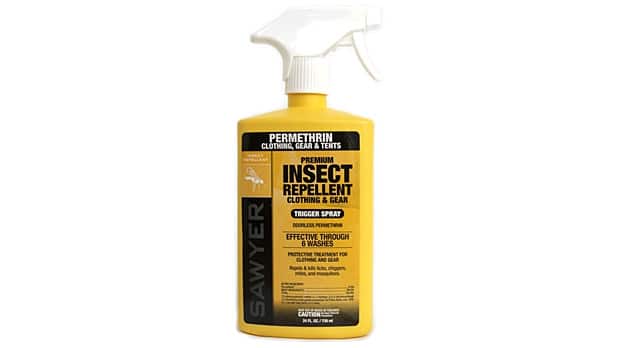 A Powerful Bug Spray for Your Clothes

No one like bug bites. They’re ugly, itchy, and can add serious anguish to otherwise enjoyable camping trips or canoe floats. But blood-thirsty insects like mosquitoes and ticks are more than just annoying: They can be downright dangerous, carrying and potentially infecting you with killer diseases like West Nile and Lyme disease.

If you spray yourself with a DEET– or picaridin-based insect repellent before heading out for a hike or whacking balls at the driving range, you’re on the right track. But to ensure the ultimate protection in the woods, on the water, or wherever biting bugs are most abundant, we say take it one step further: Pretreat your clothing and fabric-based gear (tents, sleeping bags, camp chairs) with Sawyer permethrin, a high-powered leave-on spray that not only repels, but also kills ticks, mosquitoes, mites, flies, and dozens of other insects on contact. Obviously, you’re not going to treat your entire wardrobe, but for clothes you consistently wear while hiking, camping, canoeing, or fishing – your nylon conversion pants, flannel shirts, and fleeces – pretreating them with permethrin can give you a decisive edge against insects.

This stuff is easy to use – just hang clothing over a deck railing or a line in your garage, hold the bottle six to eight inches away, and slowly spray each side for about 30 seconds. The company says three ounces of spray per garment, regardless of size, delivers enough active molecules to do the job. Allow two hours for it to sink in, and you’re good to go.

Unlike DEET, which can deteriorate fibers, feels sticky, and carries that nasty bug-spray stench, permethrin is odorless and doesn’t damage clothes or gear. Ultraviolet rays and oxygen do break it down over time, but one application holds strong for 42 days in the elements or six washings, according to Sawyer. Store your tent and other treated gear out of the sun and stuffed into an airtight bag or pack to maintain maximum effectiveness.

Don’t spray permethrin directly on your skin – it’s completely harmless, but won’t do you any good, because your skin just metabolizes it right away. That’s where topical repellents come in. Cover exposed body parts with a DEET- or picaridin-based spray, lotion, or ointment to complete your two-pronged anti-insect assault.