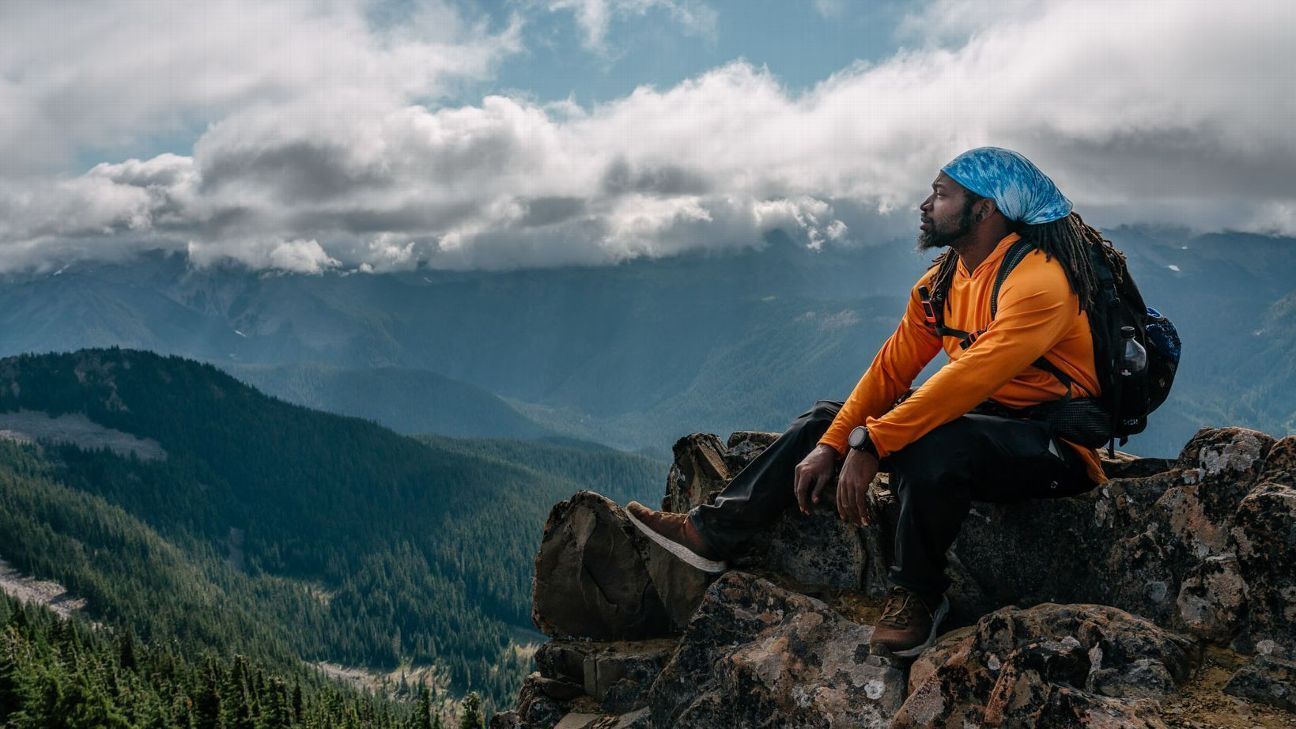 WILL 'AKUNA' ROBINSON, 40, strides with authority and speed on the trail. He learned long ago that if you're gonna do something, you do it right. After five years of avid thru-hiking, he still pauses to say hello to everyone he can. Some he knows from previous trails, when they shared miles and hardships. Some recognize him from Instagram, or as the first Black man to complete the America's nearly 8,000-mile Triple Crown of Hiking in September of 2019, his visage in catalogues and strewn across web banners as a brand ambassador for Merrell footwear.

It's late August, that sleepy part of the calendar full of rich sun one moment and whispering with near-autumn chill the next. Akuna leads our squad of three -- the photographer Andy, a rangy outdoorsman from Wyoming, and myself, the standard idiot writer who overpacked, just glad to be keeping up -- along a section of the Pacific Crest Trail in southern Washington state through the Goat Rocks Wilderness, near White Pass. Mount Rainier looms to our north, Mount Adams to our south, and it's impossible to not let the scattered, echoing birdcalls into one's soul.

Back in the world, everything's on fire. The concepts of common purpose and unity seem as farfetched as they ever have in a divided America. A new variant of COVID-19 has emerged, threatening the tenuous "return to normal" society's been creeping into. The same day we enter the trail, Kabul falls to the Taliban. Akuna and I are both veterans of the Iraq War. We both have friends who served in Afghanistan, and are having a very hard time with it all. And a tropical storm's forming in the Caribbean, causing meteorologists to wonder if it might make a play for the Gulf Coast ...

Point being, the sparse cell reception isn't the worst thing. These are dark days.

Akuna knows dark days from before. He experienced years' worth of them after returning home from Iraq, days when he felt a husk of a person, barricaded in his room under a hazy miasma of alcohol and painkillers, leaving only when he absolutely had to and sometimes not even then. The past kept him there, the relentless hold of memory refusing to abate. Possibilities, joy, even tomorrow, those were hopes tossed at his door. He existed to exist. Life, fulfillment, these words belonged to others.

And the nights? The darkness was at its strongest then. It bore no face nor shape, though it did smell: An acrid mélange of diesel fuel and manure he associated with Iraq. One night, he tried to escape. Medication prescribed by the local VA, handfuls of the stuff. Because of chance, God, whatever -- he vomited most of it up, saved by the same body he'd sought to destroy. His mother made him promise never to do it again, and such was the force of this woman, he hasn't.

He returned home to his beloved Southeast Louisiana, the place that shaped him, a place teeming with resilience and cheer, and even it couldn't cure what ailed. He'd fought in an ugly war for his country and come back changed, stronger in some places and maybe not stronger in others. He understood this was an ancient tale, one older than even the country he'd fought for. Even so.