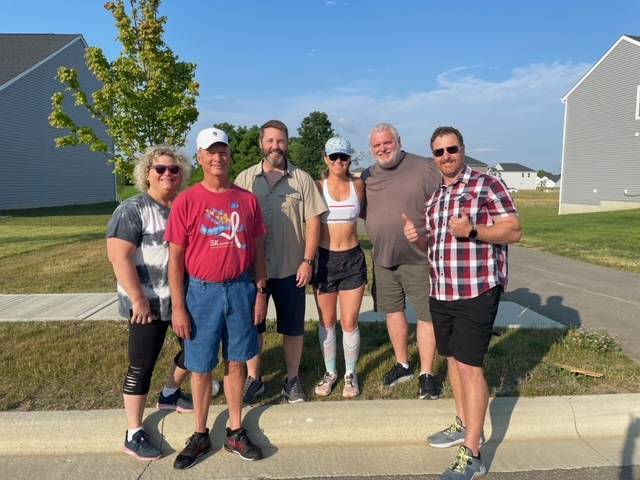 SUNBURY — Endurance athlete Katie Spotz stopped in the village on Saturday as part of an unprecedented run across the state of Ohio.

The purpose of the run is two-fold. First, Spotz wants to set a record for consecutive ultramarathons by a woman — “11 ultras in 11 days,” says her website. Second, she wants to raise money to fund 11 clean water projects in Uganda.

Spotz is attempting to run 31-mile ultramarathons for 11 days in a row — a total of 341 miles across her home state of Ohio. She began on June 21 in Cincinnati, and she started from Sunbury’s Sandel Legacy Trail on the morning of June 26. A government official or leader from the communities where Spotz started and finished her run each day was asked to certify her efforts for proof of the record.

“Katie is a true inspiration,” said Sunbury Mayor Joe St. John in an email to The Gazette. “I had the honor of being the official witness for the start of her Day 6 ultra marathon Guinness Book of World Records attempt. She started her run just south of the Sunbury Boundary on the Ohio to Erie Trail.”

Originally, Spotz was slated to start near the Condit Presbyterian Church at 15102 County Road 44, and she passed near there while on the trail.

We are Delaware County's only daily newspaper and we publish Monday through Saturday.